Everything written below applies to Suite 1-5, the 6th Suite is a totally different thing. I’ll write another article about that one when I get to it.

There’s lots of debate about how to read the Cello Suites sheet music to perform them on Bass Guitar, should we play them as written? Should we transpose them, or maybe use different tunings?

It seems that there is no ‘right’ way to do this. The Cello Suites were written for Cello, not for Bass, if there was a ‘right’ way, it would at least involve a Cello, right?

In this article I’ll try to explain the arguments for transposing. I may write an article about alternative tunings later.

First thing to clear out is that the Bass is a transposing instrument.

A transposing instrument is a musical instrument whose music is recorded in staff notation at a pitch different from the pitch that actually sounds (concert pitch). A written middle C on a transposing instrument produces a pitch other than middle C, and that pitch identifies the interval of transposition when describing the instrument. For example, a written C on a B♭ clarinet sounds a concert B♭.

In other words, if a transposing instrument plays a piece of written music, it will play different notes than a pianist would play.

If you ever tried to use the same score as a saxophonist, you know this. A C for them is a B♭ (or E♭ if it’s an alto or baritone) for us.

The Cello isn’t a Transposing Instrument

When a Cello reads a middle C, and plays that middle C, it sounds like the middle C.

Nothing left to say about this, moving on.

Bass Guitar is a Transposing Instrument

The transposing interval is an octave down, C4 sounds C3. So if we play a part written in Concert Pitch, we are playing an octave lower as intended.

When we read a part written for bass, this octave is allready taken care of by the author of the score. However, if we want to play a piece written in Concert Pitch (as Cello parts are), we have to transpose an octave up. Unless we intend to play it an octave lower of course.

So when we read E2 - normally our open E string - we should play the E 3d string, 2nd fret.

The Cello has quite a range, from C2 to C6, the highest note in the Cello Suites is A4. Which occurs just once, most movements don’t go higher than G4. 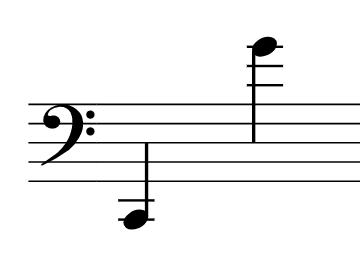 Cello Range used in the Bach’s Cello Suites, C2-G4 (A single exception to A4).

The Range of (a 21 fret) goes from E1 to E4, a 24 fret bass guitar goes up to G4. As you can see below, that range is definitely large enough to fit the range of Cello Suites, and we can go a minor 6th lower.

See how low our low E in concert pitch really is?

This range difference poses a few problems if we want to transpose to the original pitch.

First of all, unless we have 24 frets, we can’t reach the high notes. And even with 24 frets, the highest A4 can’t be reached. The only options to play all movements at the original intended pitch is with an alternative tuning, or a 5 or 6 string.

Secondly, writing the sheet music for bass makes it really hard to read, since all the higher notes will be way above the staff.

To fix the range issue, I added transpositions to other keys. I think the sweet spot is to transpose down a fourth. This brings the music perfectly within any basses range, while making the transposed notes readable.

I left the score for the original key in Concert Pitch.

Don’t worry, all you need to know is that when you see ‘Concert Pitch’, you’ll have to play everything an octave higher. If you are confused, check the tabs to be sure.